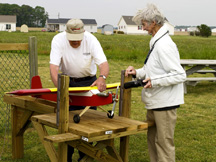 The club met for the first time in several months outside for a members’ meeting.  With recent ‘Stay at Home Rules’ being relaxed and announced approval of Outdoor Recreation activities, the meeting was well attended while the members spread out chairs around the central pavilion.

Due to the required cancellation of previously scheduled Events, the members discussed various ideas for generating funds.  By a show of hands, members and the Board voted to approve a new “Lifetime” membership to the club, which was an idea provided by a member.  Any AMA member in good standing will now be allowed to become a Lifetime Member of Eastern Shore Aeromodelers Club for $1,000 which essentially prepays 10 years at current member dues rates.  The Club will greatly benefit from building a cash cushion which was depleted in establishing the new field. Members not wishing to become Life members, but desiring to assist the club are invited to make a donation of funds in any amount.